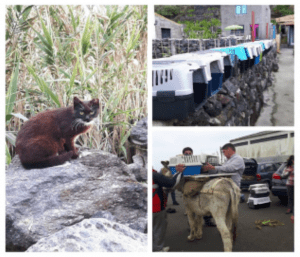 Castration projects for dogs and cats in the Azores, animal placement

Animal Welfare – Angel de Relva is a very active small society, with lots of personal and private commitment to the protection of animals on the Azores, a Portuguese group of islands.

The Project Guardian Gisela Brettschneider (Airliner4Animals member) who lives on the Azores (Sao Miguel), initially with the intention of a quiet 3rd chapter in life, discovered very quickly, together with her husband Dirk, that they could not look the other way with so much animal suffering on the Island.

At first they privately saved many neglected, sick or young stray dogs by finding them homes in Germany. Without their dedication these animals would have died. They then found Dr. Teves a great local Veterinary, who supported them and cared for the sick animals in his clinic.

2016 they, by chance, met Marion Schäfer, the chairperson of the Animal Welfare Organisation – Angel da Relva, who is also committed to the animals on the Azores. A stroke of luck; resulting in the collaboration of Marion Schäfers Organisation and Familie Brettschneider – a super Team!

Apart from the dog mediation, the Azoredogs are a dream of a breed, when it comes to character, social behavior and compatibility; they dedicate time to a special cat project.

Since 2016, both locals as well as tourist, report on cat colonies. The organization catches & castrates the cats, and returns them to the area where they live. This is outstanding animal welfare; the cats, used to living in the wild, retain their freedom without procreation. Only obviously abandoned animals, used to a home and people , or cats with a disability which would compromise their survival in nature, are brought in for rehoming.

A couple of days ago Marion returned from the Azores where she had concluded quite a spectacular Cat Castration Project. Consider, 10 pregnant cats would yield at least 30 kittens and those in turn would reproduce!

We hope, that with our financial contribution we can support your good deeds and thank all members and donors of Airliners4Animals, without whom this would not have been possible.

Unbelievable!! The Airliners4Animals started with the donation from the emergency pot and our donors supported some more: in less than 10 days, 25 cat castration sponsorships were received and Dr Teves and his team have already begun with the work.

More castrations with photos of the dogs and the name of the sponsor will follow in the New Year, so that you are able to follow the progress of the project.

Castration is sustainable animal welfare and the primary goal of the Animal Aid Angel da Relva .

I am filled with joy that so many are walking this path with us. Thank you!

You can join, become a member and help us and our projects:

FOFA – the Rescue of FOFA, a female dog

This is a special story – from Animal Aid Angel da Relva

Not only because of the cruelty, abandoning this dog, in the cliffs,  left to his fate, but the dedication of the people living in Sao Miguel, who go out of their way for the animals.

We too have helpers in the clinics, without which we would be quite helpless at times! Thank you to all the local rescuers and helpers!!!

“FOFA” was dumped in the cliffs in Povoacao. She spend weeks without food, no one had the courage to climb down to her. They lowered food and water to her, but she ate very little. She cried and howled for days. Eventually an animal  lover was courageous enough to abseil to the dog. The rescue mission was a success. In the mean time she has recovered in the clinic and is quite trusting. She is a slightly scared and cautious bitch, but cuddly and affectionate. She is a Podenco-mix, 1 year old , 50cm tall, 11kg heavy at present. She will travel innoculated, chipped and castrated to her new forever home. If seriously interested, please contact Gisela Brettschneider or Marion Schäfer.

Thank you to everyone for saving Fofa!! The video of the rescue can be viewed on the Animal Aid Angel da Relva Site.

Our society is thrilled that together with the Angel de Relva Animal Aid, we support such an amazing Project on the Azores.

Become a member of Airliners4Animals:

Here we work together with the locally based Club Animais de Rua, who take care of the cat colonies all year round, great work do with the catch & release actions, but who, on Sao Miguel, have limited financial possibilities to achieve great things. Often house cats are dumped at feeding spots, where they have little chance of survival in the clowder of cats. These cats too come to Germany via us and are re-homed. Many cats living in the wild are shy and are castrated; FIV/FELV tested and provided they are healthy, returned to their place. As a sign of the castration, globally, a cats left ear is cut. A special operation took place in May of this year in Rocha da Relva, a small settlement along the cliffs, accessible via a donkey path only.

A whole group of non-sterilized cats lived there. With the help of the local inhabitants, 2 donkeys, a horse and a scooter, the cats were brought up to the road, taken to Dr Teves Clinic for castration and 3 days later all taken back. It was fantastic…..all 21 animals had been caught. 3 babies will be caught next week, meaning the clowder of cats can continue living there without increasing in numbers, which the people, who mostly come for the weekend, would not be able to take care of .

I think the photos speak for themselves

This project too will receive this week Euro 588, for this quarter, an amount accumulated from donations and members contributions.

Therefore we are happy to welcome more members – who impressively inform us  where the monies go to!

Naturally our work did not only focus on the castration pojects.

On my second visit I met our sponsor guardian Gisela Brettschneider, who has been living on Sao Miguel together with her husband Dirk, for a number of years. She has a heart for animals and is amongst the Germans who have been approached to help. It was quickly clear that the two of us are a great team, and thus we arrange that stray and abused dogs or those that escaped death, are put into loving homes in Germany.

In the mean time we have kind helpers on the island, that take care of the animals during their stay in the veterinary clinic, assist with the catching of cats that need to be castrated and who regularly check the feeding stations. In Germany, we would also not cope with the placing of animals in new homes, if it were not for the families and foster homes. In addition the board is responsible for the proper handling of the importation, accounting and unification, as well as the administration of donations.

Our dogs and cats are prepared for exportation in the Clinic Vila Franco do Campo, Dr. Teves and Clinic Populo & Dr. Pedro, all of whom we trust completely.